Between Outemu Vs Cherry MX switches, you may get confused about what to choose as both have their own benefits and drawbacks. “Should I trade some of the qualities for a much lower price? Or, won’t saving some money make me feel regret later on?” And, so on.

With a mission to help you solve this difficult calculation, we provide here a detailed comparison between the pros and cons of Outemu vs Cherry MX. Let’s get dive right into it.

What are Cherry Switches?

In the introduction on the Cherry MX official website, they claimed that the Cherry MX switches are the world leaders in mechanical switch technology. What they claim is totally right. They are the beginning and also the king without a throne on the market.

The signature cross-shape peak and colored versions are their own creation that was duped by many other switch brands. The high price is backed up by German technology and if there is something that Germans are good at, it will be technology.

Right now, they have 14 different versions in their Cherry MX switch line, providing people with many options to choose from. It seems like whatever your preferences are, you can pick out one colored switch from their line. 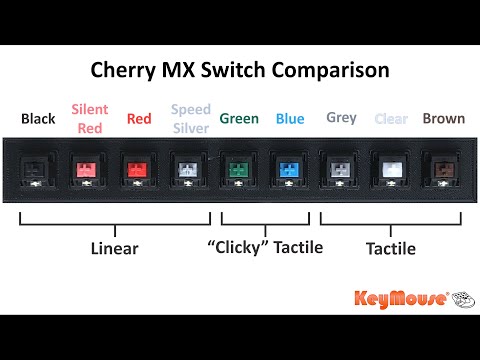 What are Outemu Switches?

When the patent of Cherry MX expired after 30 years, competitors quickly jumped right into the switch market. Brands like Outemu cannot miss the opportunity, so they provided cloned versions that took after the cross-like shape and different colors for different versions.

Outemu switches come from a Chinese company named Dongguan Gaote Electronic Co. As they are specialized in producing electronic gadgets for brands over the world, they are able to introduce switches that are the most similar dupes of Cherry MX within that low price range. That of course becomes their selling point. High quality for a not high price.

They are having 12 versions in line. Besides their mimic versions of Cherry MX, they also released their new line which’s called Outemu ICE switches. The Outemu ICE is made for LED keyboards, as they use transparent material to make the housing. 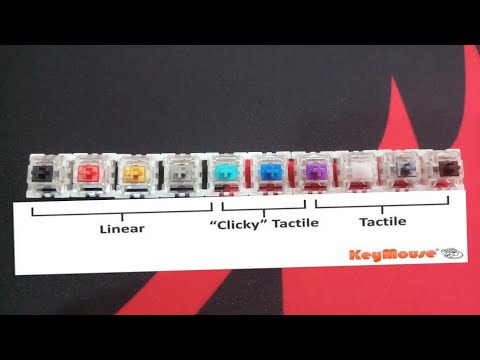 Now, we will move to the next stage of the comparison between Outemu Vs Cherry MX switches. Let’s put them on the stage so they can compete with each other.

The video below compares sounds from four different switch brands. Outemu at the beginning at 0:01 and Cherry MX at 1:00. Enjoy! 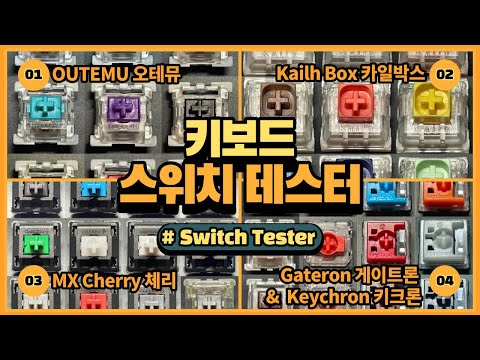 Even though they have more than 10 different switches in their line, we only compare their most famous versions in this article, which are Brown, Blue, and Red switches.

In this video, Grevor Gramr shared his opinion about Outemu Brown Vs Cherry MX Brown. 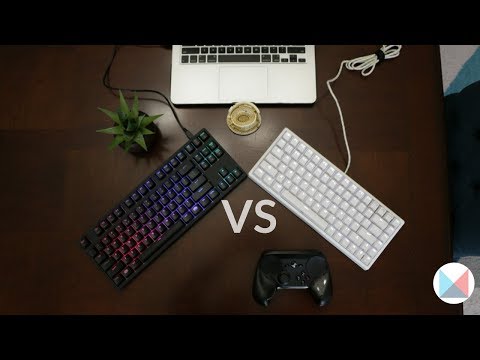 The reputation as the closest dupe of Outemu Switches is not just for fun. Look at the specification table. All the numbers are well-matched. However, do that makes the Outemu Brown switches perform exactly as the Cherry MX Brown?

The answer is – there is quite a big difference between the two. In the Outemu Brown switch, the spring is stiffer. That results in a deeper and louder sound. And, it may be also a reason why the Outemu Brown is way smoother than the Cherry MX Brown, almost feeling the same as the linear type.

On the other hand, the Cherry MX Brown switches are crispier, hence they provide a more precise bumpy feedback that a tactile switch should have.

To sum up, if you want a switch that is between a tactile and a linear type, you may want to go for the Outemu Brown. If a tactile switch should act as a tactile switch in your opinion, Cherry MX Brown is a better fit for you.

To learn more about how the two Blue clicky switches perform in real life, check out the below video. 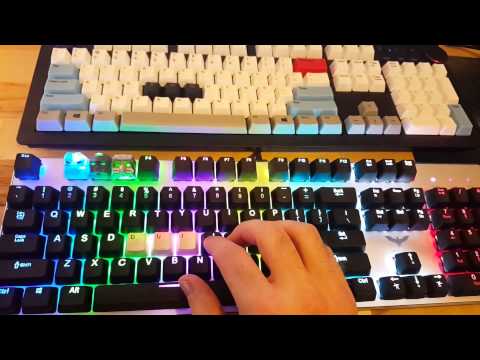 The nature of clicky switches make them tend to be heavier, more wobbly, less long-lasting, and have slower key response speed, compared to tactile and linear type.

Both Outemu and Cherry MX share the same wobbly issue, however, Outemu is scratchier but provides a more satisfying tactile feedback. It has a higher pitch so the sound released is louder. This could be a bonus or a minus based on people’s preferences.

The Cherry MX Blue switches last longer by a margin of 10 million keystrokes. It is also way more durable and therefore, worth the extra money.

In conclusion, with the durability and the longevity, we would say the Cherry MX switch is a nicer option.

How silent are those two switches? You can check it yourself in the below video. 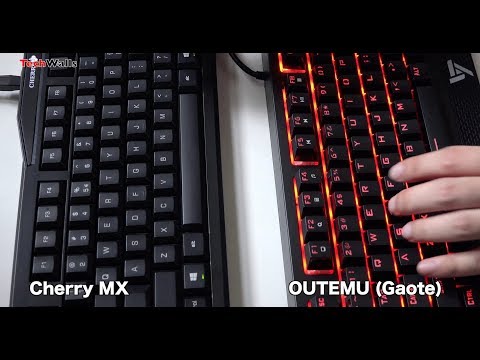 Among the three colors that we have mentioned so far, Outemu Red switches are the closest to Cherry MX Red. They both provide a very smooth typing experience and a nice low sound that is suited for public places. But, in our opinion, Cherry MX’s sound is a bit lower.

The major difference is that Outemu Red Switches require more force from your fingers to activate, with 50 gf compared to 45 gf of Cherry MX Red. However, this is not that noticeable unless your hands are on a super sensitive side.

Another difference lies in the weakness of the Outemu switches in general. They are shaky and scratchy, and also their life cycle is half of that of the Cherry MX switches. But, of course, Outemu offers us a real bargain.

To conclude, we think Outemu Red switches and Cherry MX switches are on par after considering all the aspects.

Outemu vs Cherry MX switches: Which one is better for you?

Outemu Vs Cherry: The winner is the legendary Cherry MX

The design at the bottom of Cherry MX is extremely precise, hence all of their switches are very stable, except that the Blue clicky switch is wobbly in nature. Thanks to the firm bottom, the tactility of the Cherry switches in general is crispy and sharp.

On the other hand, the tactility of Outemu switches is nice. However, the keys are a little bit shaky, because there is extra space at the bottom – may be due to cost-saving. In addition, the off-center keys are even scratchier than the center keys.

Outemu Vs Cherry: Once again, the Cherry MX goes and takes the crown

As we have mentioned the precise design of Cherry MX switches, that precision allows all the presses on the keyboard to be stable and consistent.

In contrast, there is a lack of consistency between the off-center and center keys of Outemu switches. Moreover, the shakiness among the keys cannot result in the desired stability as the Cherry MX. It is also worth noticing that many users responded there are some issues caused by the switches after using them for a while.

Outemu Vs Cherry: No surprise! Cherry MX switches have better sound quality than the Outemu

Overall, the Outemu switches have a louder sound or higher pitch than the Cherry MX switches. This can be seen in almost clicky and tactile versions. In the linear versions, the sound of Outemu is deeper or more metallic, which may be annoying to some. This might be due to the quality of the material or the design. That is why we think the winner is Cherry MX as they have a more luxurious and sophisticated sound.

However, some respond that they prefer Outemu’sound to the Cherry MX despite the fact that it sounds cheaper. For example, the Outemu Blue sound may be so high and noisy for some people so they pick Cherry MX. But, there are people who truly enjoy that ‘noise’ as they think it is fun.

Of course, sound is something very personal. So, we recommend you take a look at those videos we have included for a preview.

Outemu Vs Cherry: The winner must be Cherry MX, you know. We pay that much anyway.

Being the world leader in switch technology, it’s easy to get why the durability of Cherry MX is way higher than Outemu. Whereas Outemu’s users sometime respond that the keys got into problems after a while, Cherry MX’s users feel very confident in the durability of their mechanical keyboard.

Moreover, the longevity of Cherry MX is double that of Outemu. Lab test shows that Cherry MX can be used up to 100 million keystrokes – except for the Blue line, which is a very long time.

Outemu Vs Cherry: The only aspect that Cherry MX cannot beat Outemu, is price.

Even though Cherry MX is the first brand and its products are of top quality, some people decide to go for other brands, which include Outemu. The major reason is that their price is much lower. Take the Blue Clicky switches as an example. A pack of 10 Cherry MX switches will be $10 while you can get 20 Outemu switches for $12.

Can I use Cherry switches on the Outemu keyboard?

Many users say that this is quite a difficult task. The reason is that the Cherry MX pins are smaller than the Outemu pins, so they cannot fit into the Outemu keyboard. You may change the pin, but we think this will be a hassle and risk, so not recommended.

Which Outemu switches are better than Cherry MX?

In general, Cherry MX switches have a better quality than Outemu. But, there are some lines from Outemu that are really awesome, even on par with Cherry MX. They are Outemu Brown switches, Outemu Black switches and Outemu Red switches.

Where could I buy Outemu switches?

You can find them on Amazon, eBay, drop.com, flashquark.com, or mechanicalkeyboards.com

Where could I buy Cherry MX switches?

You can buy Cherry MX on Amazon, mechanicalkeyboards.com, or Walmart.

Between Outemu switches Vs Cherry MX switches, Cherry MX is the winner in terms of quality. However, Outemu switches offer a much lower price with a decent quality that can save your pocket. Despite being a clone, Outemu switches have their selling points in addition to the price, for example, transparent housing for LED keyboards or a unique tactile-linear Brown switch.

Register now to get updates on promotions and coupons.