Gateron vs Cherry Switches - Which Should You Choose?

The debate between Gateron vs Cherry switches is one that frequently arises in the mechanical keyboard market.

There are many different points of view among keyboard enthusiasts. Some like the Gateron for its creativity and affordability, while others prefer the Cherry due to the brand’s heritage and quality.

So, Gateron or Cherry switches: which ones should you choose?

If you have stepped into the world of mechanical switches, choosing the best suited between these two brands may confuse you a lot.

With that in mind, we will help you break down all aspects of Gateron vs Cherry switches. You will then have a better understanding of each type and their differences.

Cherry, a firm based in America, was established by Walter Kirsch in 1953. In 1979, the company relocated to Germany, where it is still active today.

Since 1973, Cherry has been a manufacturer of keyboards. They are recognized as the largest keyboard maker in existence as well as building a large part of the mechanical keyboard market.

Cherry used to be the only manufacturer of switches on the market because they obtained the patent and copyrights to their inventions. Nonetheless, as the patent ran out a few years ago, businesses gradually appeared to duplicate their designs.

These later Cherry-inspired switch makers quickly became competitors to this long-standing brand, offering comparable quality but at a lower price. Some keyboard enthusiasts even prefer those “imitated” switches to the famous yet expensive original ones.

This leads us to the next story of a brand, Gateron.

Although Gateron does very little marketing strategy, Gateron is still expanding its market share in the industry of mechanical switches.

Gateron initially focused solely on manufacturing Cherry MX clones, but in recent years they have started to innovate more in the industry. Hardcore mechanical keyboard fans greatly value Gateron’s Zealio switches, which were produced in conjunction with Zeal PC.

Their switches even have been remarked to outperform Cherry switches. Most notably in their linear switches, Gateron is famous for the smoothness that its switches bring to users.

Moreover, Gateron switches have a lifespan of 50 million keystrokes. Their switches are identical to Cherry in terms of spring tension, activation point, and travel distance.

With these in mind, Gateron switches have had a solid reputation among enthusiasts for a long time. Users have noted that Gateron switches’ improved smoothness and lower pricing are the key differences between the two.

So, if you are on a budget, Gateron might be a better option.

Let’s see the main features of Gateron switches in the table below:

If you want to learn more about Gateron switches, check out this post Master Guide to Gateron Switches.

In the 1980s, Cherry started manufacturing their MX switch. The MX switch swiftly rose to prominence as the industry norm. The majority of keycaps can be utilized with switches from various manufacturers thanks to this standard.

As they were the first ones, Cherry MX switches are now still regarded by most users as the greatest switches available today.

Their price is typically a little more expensive than other brands ($0.50 to $1.00 each switch). Despite that fact, people prefer mechanical keyboards with Cherry MX switches because of their exceptional quality and durability.

Colors are used as codes to identify each Cherry switch type. They can also be distinguished by their sound, and feel.

Besides, Cherry switches often have a lifespan of up to 100 million keystrokes or more per key, which is sufficient for decades of use.

This table shows you a summary of Cherry switches specifications:

Read on Cherry MX Switches: A Complete Color review to better understands this type of switches.

Before choosing Gateron or Cherry switches to buy, there are several different factors to take into account.

In terms of overall feel, we’ll decide which is the most comfortable to use as well as the best for a satisfying gaming and typing experience.

We’ve found that Gateron switches feel superior overall after testing many switches from both brands.

As previously said, Gateron obviously prioritizes creating a smooth key switch that is pleasant for users. Thus, less resistance or scratching is generated when the keys travel.

On the contrary, Cherry switches will have clear scratchiness at the beginning of use. While some users said this scratchiness lessens after usage, some dissatisfied users find it difficult to get used to the scratchy feeling

After all, Gateron wins for the overall feel since its linear switches are more seamless than Cherry MX.

When it comes to affordability, Gateron comes out on top because they are substantially less expensive than Cherry MX switches. The reason can be explained below:

Cherry switches are created in Germany and put through strict testing to confirm their long durability. As a result, the price will be much more expensive. You can buy a pack of 10 pcs switches at the price of $10.80 (see the image below)

But just with the same price (even lower), you can get a pack of 12 Gateron switches (see image below)

Why can Gateron offer that price level? Standard Gateron switches are produced in China for less expense while copying the Cherry MX design. Besides, what kind of evaluation is done on the switches is also not quite clear.

Overall, standard Gateron switches are often more affordable than Cherry in the aftermarket.

However, in addition to standard switches, both brands offer certain extremely sought-after or limited-edition versions of switches, which may cost a lot of money to collectors.

When mentioning quality standards, as was said in the previous part, Cherry MX is unbeatable, hence Cherry MX completely dominates Gateron in this case.

The lifespan of Cherry MX switches is twice as long as that of Gateron.

They can withstand 100 million keystrokes. The switch may still function flawlessly after the limit is reached, but it will no longer show the optimal force curve.

Gateron switches, on the other hand, have a 50 million keystroke rate. Although this is still a high figure, Gateron doesn’t quite live up to Cherry MX’s high standards of quality.

Gateron switches generate a little less loudness than Cherry MX switches since they are smoother and less scratchy. This smoother keystroke results in reduced rubbing and friction, which reduces sound emission.

Therefore, Gateron switches should be generally quieter than Cherry switches when compared in volume, while Cherry MX switches may be louder in some switch color variants.

Yet, if you like the clicking sound, Cherry would come out on top.

Watch this video to hear how Gateron and Cherry switches differ from each other: 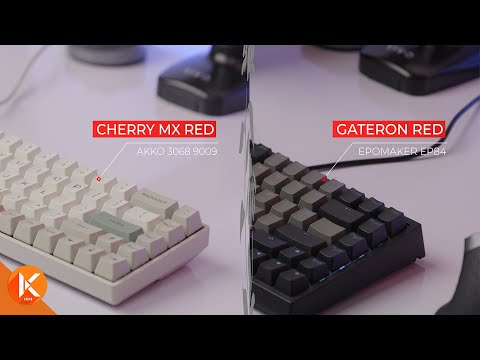 There are several different choices available for Gateron vs Cherry switches.

When comparing the number and variety of switch selections, Gateron surpasses Cherry.

However, if you require a quick swap for gaming, Cherry could be a decent alternative because they do so whereas Gateron does not.

In the end, everything depends on your setup’s demands and which switch options meet those requirements.

Given their long history in the market, Cherry MX switches are undoubtedly the most widely used switch type. You can easily find them on both mid-range and high-end keyboards.

Overall, because the majority of well-known brands employ Cherry MX switches, finding keyboards with these switches is much simpler.

Like many other newcomers to the switch industry, Gateron builds its switches on the Cherry-developed color scheme. As a result, Gateron Red switches and Cherry Red, Gateron Brown and Cherry Brown switches, and so on, are similar.

Fortunately, this makes comparing the Gateron and Cherry switches with different color schemes much simpler.

Red switches have a linear switches form and provide a classic appearance.

If you do not clearly understand the parameters of a switch, read this article.

Gateron red generally seems smoother and lighter than its Cherry counterpart (although it is more pleasant to use). Besides, some users could feel that Cherry Reds are a little more scratchy than Gateron, even though this difference is actually quite subtle.

Therefore Gateron red switches may be a better choice if you want to have a smooth typing experience.

Clicky switches are those that are blue. The blue switches would be a huge hit with those who like the clicky reaction.

Typists may find the sound of blue switches to be delightful or unbearably annoying to people around them.

So, if you work in an environment that needs high concentration, you should prefer Cherry blue switches.

For the tactile keystroke, brown switches are favored among fans of mechanical keyboards.

Cherry brown switches work similarly to blue switches in that they need a little bit of pressure to activate the keystroke. Furthermore, Cherry browns have a little louder tone than Gateron browns.

Also, Cherry browns have the best tactile bump and feel good as well as firm as they are the least shaky.

Overall, Cherry Brown switches are a more adaptable choice if you use your keyboard for both typing and for playing games often.

Can you put Cherry MX keycaps on Gateron switches?

As you know, Gateron switches are also Cherry clones. So, do Cherry keycaps work in Gateron?

The answer is yes.

The PCB, plate, and keycap dimensions of Cherry MX are identical for Gateron and other Cherry MX clones. As a result, most artisan or third-party keycaps are made to be compatible with Gateron and Cherry switches.

Each user will get a preference for certain switch brands. Both Gateron vs Cherry switches is rated as the very best producers of long-lasting, high-quality switches.

Gateron switches are the best affordable option if you are on a budget but still look for something good-quality.

Cherry MX switches will be your best bet if you desire a switch that is extremely reliable and last your entire life.

After all, choosing Gateron or Cherry switches ultimately comes down to your personal preference for the sound and feel; price, and overall experience.

Register now to get updates on promotions and coupons.